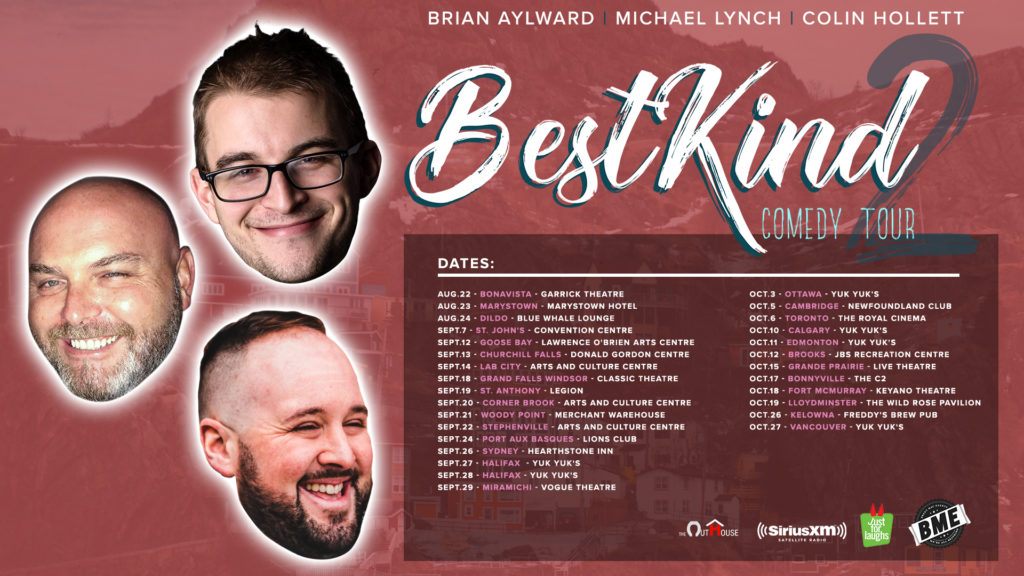 BEST KIND COMEDY TOUR 2 – October 15 @ 7:30 pm
“The b’ys are back”
After a very successful nationwide tour last year, the Best Kind Comedy trio are back at it with Best Kind Comedy Tour 2! All new material.
One of Canada’s most original voices, Colin Hollett, internet sensation Mike Lynch (The Outhouse) and former Canadian Comedian of the Year Brian Aylward are bringing their funny across Canada this fall. The 2018 tour earned rave reviews and sold out shows all across Canada. This year’s tour will be more than 30 shows coast to coast. Come on out and celebrate the unique charm and humour of Newfoundland’s funniest. These guys are
guaranteed to give you one of the most memorable
nights out this year.

Mike Lynch is one of the new faces of Canadian
comedy. The star of Outhouse TV, his wide range of
sketch characters, such as Cecil O’Brien and Randy
Lee, have become household names across Canada.
As a stand-up, Lynch has a loyal fanbase that
continues to grow today. He is a prolific creator and a
relentless performer. This hilarious, young talent is
not to be missed.

Colin Hollett’s​ second time on stage, he won the Great Canadian Laugh-Off comedy competition and represented Newfoundland at the national competition in Toronto. Hollett had the highest voted video in Canada for the Russell Peter’s BFF comedy competition. He boasts a great online following from his many viral video rants and comedy sketch guest appearances on the very popular Outhouse TV.

Brian Aylward​ has been a Comedian for 13 years, performing over 2700 shows in more than 20 countries. Brian’s solo show “Big In Asia” was nominated for “Best Comedy” at 2017 Fringe World in Perth, Australia. In 2016, Aylward was awarded “Best Standup Comic” at the Canadian Comedy Awards. His numerous viral videos and sketch character “Fadder” have garnered millions of views online.
Best kind!