Celebrating our 60th Anniversary Season in 2022-2023! This is the story of Grande Prairie Live Theatre. The story of how more than 4100 different actors, singers, dancers, directors, producers, stage managers, set designers, costume designers, seamstresses, makeup artists and many more behind-the-scenes contributors have entertained over 270,000 people over the past 59 years. Proudly we say “we’ve come a long way baby.”

We have done a wide selection of plays over many different genres; 318 productions over 56 years. Plus over 100 concerts! And festivals! We incubated the prestigious Reel Shorts Film Festival for it’s first 10 years and the Grande Prairie Children’s Festival for 2 years. That is an amazing body of artistic work for an ever-changing group of creative and enthusiastic volunteers. We have grown as our region has grown. We have grown from 2 shows a year with 35 volunteers in 1963 to 84 nights of entertainment and nearly 300 volunteers in 2021.

We are surviving Covid 19! Before Covid our 2019-20 season had 577 total bookings of space between our two theatres. The closure of all theatres on March 15 caused the cancellation of 130 bookings including 39 cancelled performances and events. We lost the final two productions of our Play season, Much Ado About Nothing and La Cage Aux Folles plus the ADFA Adult One Act Play Festival and 2 concerts, one of which was sold out. Over 60 volunteers dedicated thousands of hours to the Much Ado and La Cage productions. We thank them for their creativity and time. It was so disappointing to have to tell them these plays could not go on as planned.

Thinking positive thoughts and knowing that so many people were relying on GPLT for live theatre entertainment in 2020 we planned a full season of 6 plays with a delayed start to October. We successfully completed the October run of Every Brilliant Thing when live theatres were closed. We postponed 5 plays hoping to perform these at in a future season. We are excited that live theatres did open for September, 2021. Thankfully our 59th season was full of entertainment for all ages with all planned plays and musicals going ahead. 2022-2023 is our 60th Anniversary Season. We have so much fun planned for all ages! 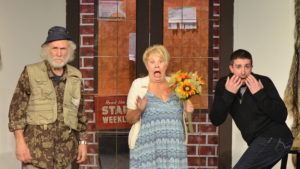