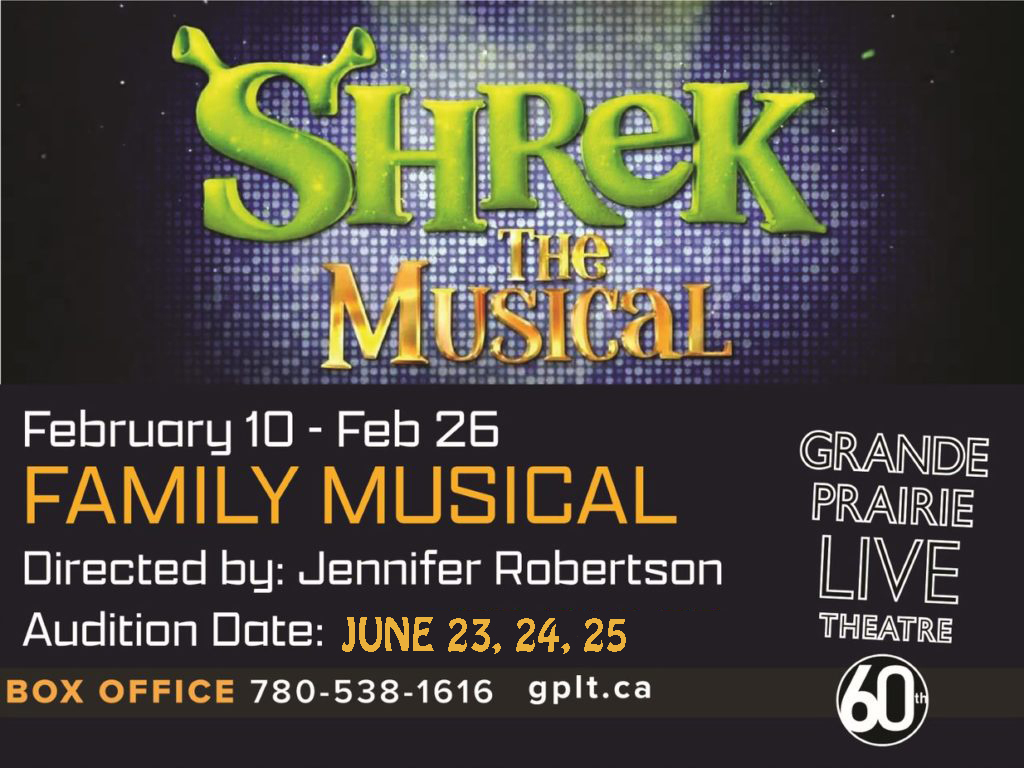 These auditions are open to anyone, subject to the age limits described below.

Contact the GPLT Box Office to book your audition time and to get more audition information: 780 538 1616, Box.Office@gplt.ca

Shrek the Musical
Based on the Dreamworks Animation Motion Picture and the Book by William Steig
Book and Lyrics by David Lindsay-Abair , Music by Jeanine Tesori
is presented through special arrangement with Music Theatre International (MTI)
All authorized performance materials are also supplied by MTI.
mtishows.com

Shrek Audition Package:
Auditions June 23,24,25 2022 Thursday: 6:00 -9:00 Friday: 6:00 – 9:00 Saturday: 1:00 – 4:00
Show Run: Feb 10th to 25th 2023
Thank you for auditioning for Shrek the Musical!
Minimum age to audition is 10 years old.
*There are a limited amount of roles for ages 10 to 18 years old*
Rehearsals are tentatively set for Mon/Wed 6:00 – 9:00 and Saturday 10:00 – 1:00
This is subject to change dependent on rehearsal space.
Singing
For your audition, you will choose to sing one of the following songs:
• I Know It’s Today (Fiona)
• Big Bright Beautiful World (Shrek)
• Story of My Life (Pinocchio and Fairy Tale Creatures)
• Ballad of Farquaad (Lord Farquaad)
• Don’t Let Me Go (Donkey)
You will then choose one other song of your choice to perform. This song must be from the Musical Theatre genre, as we are looking for the acting behind the song also.
If you are auditioning for Fiona, you will also be asked to sing a scale to determine the top end of your range.
Read Through
For those auditioning for Shrek, Donkey, Fiona or Lord Farquaad:
If you are auditioning for Shrek, please come prepared to use a Scottish accent.
Please choose one of the following scenes to perform. Choose one character from the scene. Please come with your part memorized. Someone will read the other part(s) for you.
• Donkey and Shrek : Act One: Scene Ten
• Fiona and Farquaad: Act Two: Scene Six (#17 The Arrival of Farquaad)
• Fiona and Shrek: Act One: Scene Nine

For those auditioning for any other character:
Many of the actors cast in Shrek the Musical will be required to play multiple roles. For example, you may be cast as: Mother of Shrek, a fairy tale creature, a Duloc citizen, a dragon lady and one of the three blind mice. Therefore, I would like to see your diversity in characterization.
Monologue in three different characters: ( Old man/Old lady, whining child, British nobility)
“Once upon a time there was a little ogre named Shrek, who lived with his parents in a bog by a tree. On his 7th birthday, the little ogre’s parents sat him down to talk, just as all ogre parents had for hundreds of years before. It was time for Shrek to strike out, on his own! Ahhh, I know it’s sad, but ogres are used to that – the hardships, the indignities, the endless stream miser.”