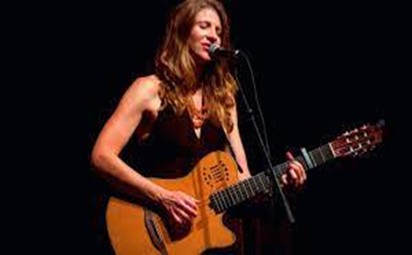 Raised on the mud banks of the Avon River, Nova Scotian funeral director-turned-songwriter Terra Spencer was recruited as a backup singer while scooping ice cream at a music festival. She can make you feel knee-to-knee with her in a room of 5 or 500 with her butterscotch voice, deft fingerstyle guitar, church bench piano, sly humour, and ‘70s wood-paneled warmth. Her startling knack for unraveling intimate stories caught the attention of Canadian musical mentors like David Francey and Matt Andersen (who chose their co-write Other Side of Goodbye to launch his recent album) and she has become a sought-after studio musician, co-writer, and workshop facilitator. Terra’s self-produced second album Chasing Rabbits won Music Nova Scotia’s Folk Recording of the Year and received nominations for ECMA Folk Recording of the Year and CFMA Contemporary Singer of the Year. Her song “Feels Like Home” was named the 2021 Blues and Roots Radio International Song of the Year. Following a full-band tour celebrating the golden anniversary of the music of 1971, Terra is currently touring Canada and the UK with Ben Caplan in support of their upcoming joint album, Old News, set for release in October 2022.
“The real deal.” – Ron Sexsmith