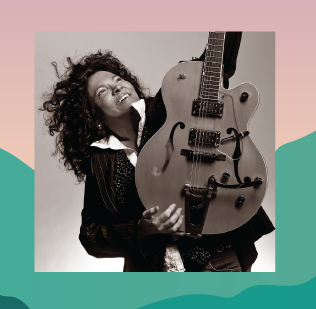 Rita Chiarelli, Canada’s most highly acclaimed female roots and blues artist, has just released the soundtrack for her award winning documentary, Music From The Big House, her 9th recording. With a JUNO (a Canadian Grammy) award and 4 subsequent JUNO nominations, she is known across Canada as the “Goddess of the Blues”. Chiarelli is a gifted songwriter and an entertaining performer, but it is her soaring 3 octave voice that sets her apart from her peers, inspires awe and often tears in her audiences, and causes critics to gush. ” a voice so blue it could make the angels weep”… “a voice that can growl at her demons or soar with the angels, a gift for lyric, an ear for melody and the heart to combine them”.

The one thing Chiarelli is not; is predictable. Over the past five years she has released Cuore, a recording of traditional Italian folk songs, which won the World Music category at the prestigious Canadian Folk Music Awards; Uptown Goes Downtown Tonight, a highly acclaimed collaboration with the Thunder Bay Symphony Orchestra; and Music From the Big House, a documentary movie filmed in Louisiana, at Angola prison, which premiered in New York and L.A. Her CD Sweet Paradise, heralds a return to Chiarelli’s blues roots, and is her first album of all original tunes since 2001’s JUNO nominated Breakfast at Midnight.

Here are the Covid rules adopted by the Bear Creek Folk Music Festival: The health and safety of our patrons, volunteers, and artists remains our highest priority. Thus, we are participating in the Restrictions Exemption Program recently announced by the Province of Alberta. Until further notice, all indoor BCFF events will have the following mandates in place:

• All event participants must provide proof of double vaccination OR a recent (within 72 hours) negative COVID test upon entry to the event. Attendees with an original (non-copied) medical exemption letter will be allowed entry.

• Masking will be required at all times while in the concert venue.

• Hand sanitization will be required upon entry.

We thank you in advance for your support of these measures. We will continue to do our best to keep everyone safe while bringing you great music!

For more info on the provincial mandate, please visit: