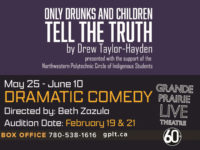 LOOKING FOR CREATIVE TEAM MEMBERS
For the GPLT Production of “Only Drunks & Children Tell The Truth” by Drew Hayden Taylor
Presented in Partnership with the Northwestern Polytechnic’s Circle of Indigenous Students
Performance Dates: May 25 to June 10, 2023

If interested in any of the above mentioned volunteer positions come to the auditions. Times listed below.
You can get a loaner script by leaving a $5 refundable deposit at the GPLT Box Office. You get the $5 back when you return the script.
If you are cast in the play, you get a complimentary copy of the script.

Winner of the 1996 Dora Mavor Moore Award for Outstanding New Play
Only Drunks and Children Tell the Truth is a full-length drama by Drew Hayden Taylor. The heartwarming, emotional and funny story of Janice, an Indigenous woman adopted by a white family, who returns to the reserve in the wake of her birth mother’s funeral. Janice finds herself struggling to find a place where the culture of her past can feed the truth of her present… connecting these two lives is proving to be a challenge.
Only Drunks and Children Tell the Truth tells the story of Janice (birth name: Grace) is a Toronto lawyer, who was raised by a white family after being removed as a baby from her birth mother on a reserve. Janice’s sister Barb ventures to Toronto with her boyfriend Rodney and his brother Tonto to convince Janice to return to Otter Lake to pay her last respects to her recently-deceased birth mother, as well as to reconcile to some of her past. Janice was separated from her birth family when she was just a toddler in the “scoop-up”, a known term depicting the removal of Indigenous children from their families in the 1950’s and 1960’s. Janice agrees to return to say a final goodbye and begins to deal with her feelings of anger and resentment, as well as to seek forgiveness. Dealing with themes of abandonment, reconciliation, identity, and cultural dissonance, Only Drunks and Children Tell the Truth is a comically rich and devastatingly truthful play, it also remains a powerful piece of Canadian theatre.
Only Drunks and Children Tell the Truth premiered in 1996 at the Native Canadian Centre in Toronto and won the Dora Mavor Moore Award for Outstanding New Play. Since then the play has been produced widely at professional theatres across Canada and in the US. Though it stands on it’s own, Only Drunks and Children Tell the Truth is the second play in a heartwrenching trilogy that began with Someday and concludes with 400 Kilometres.
Cast: 2 Indigenous female, 2 Indigenous male
What people say:
“This is a fine show … thanks for Drew Hayden Taylor’s writing … He can make you laugh one minute, then cry the next, and leaves you with lines and images that you will remember long after the curtain comes down. This is not just a great Native production. This is a great production. Period.” — CBC
“…this play is a very tender, engaging look at two strangers learning to be sisters… witty one liners and snappy dialogue has crafted likeable, real characters… brings a satisfying sense of closure to the struggles of Barb and Janice/Grace. It is a welcome ending, one that reflects hope for the future – not only for these two sisters, but also for all the others who have yet to find their way home.” — Aboriginal Voices
“This tale is reflective of real life situations and proves once again that inner strength and fortitude can help overcome our worst nightmares… could be one of Taylor’s best works to date…a moving piece of work that combines realism with satire and comedy and leaves the reader (or viewer) with memories and images they won’t soon forget…. Down to earth dialogue and realistic character portrayals make Only Drunks and Children Tell the Truth an outstanding read, and one that is likely to have its effect on anyone who picks it up.” — Alberta Native News
About the Playwright:
Drew Hayden Taylor is an award-winning playwright, a journalist/columnist, short-story writer, novelist, television scriptwriter, and documentary film maker. An Ojibwa from the Curve Lake First Nation in central Ontario, he is widely known for his thoughtful and sharply witty observations on Aboriginal subjects and issues. He has worn many hats in his literary career, everything from performing stand-up comedy at Kennedy Center in Washington, DC, to serving as artistic director for Canada’s premiere Aboriginal theatre company, Native Earth Performing Arts.